Beware of this Basic Taxi Driver

I would have just keep mum about this issue but then this driver has driven me to the point-of-no-return.

I was with my office mate Don in getting this taxi. Because we live in different ways, I didn't ask him to ride with me anymore.

I rode on this Basic Taxi with Plate No. TXD 443 in front of Microtel Acropolis - Libis along E. Rodriguez Ave. in QC, some minutes away from our office. I decided to ride the taxi there to somehow accompany Don in riding the jeep in the same area.

As I ride in the taxi, I told him my drop-off point and the way to take. He agreed to it. At first... 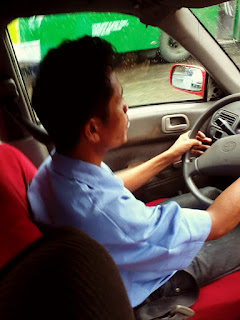 Then along came the usual M-H traffic in C-5-Ortigas area. He didn't take the fly-over, thus us being stopped by the traffic lights along the way. Then Tiendesitas - J. Vargas area came, with a much heavier traffic. He suggested to take Shaw route via Tiendesitas and J. Vargas - Meralco Ave. I insisted at first but seeing the somewhat smooth flow inside Tiendesitas I agreed.

Then traffic said hello again to us, along J. Vargas - Meralco Ave. Somehow it's still tolerable. I even sang with the classic songs played over the radio... Not until the driver took a left turn to Oranbo - Ultra Area and then tried to go back again to C-5 area.

I asked him, "Manong, saan ho kayo dadaan? [Manong, what route are you going to take?]". He said that he will go back to C-5- Bagong Ilog area. I insisted, saying that that's the original route I told him to take and then he insisted to take the Shaw one. I told  him to go back to Shaw for it's the route he wanted to take up first, and that he should take the Kapitolyo-Brixton route to Mandaluyong. Good thing he listened. And I thought this will be the end of this nightmare.

We were moving swiftly, but with a little traffic congestion along Shaw-Kapitolyo and Brixton Sts. As we were nearing to take the right turn to Reliance St., he then stepped on the accelerator and off we went to the inner streets of Kapitolyo, Pasig. He even stopped at one corner to ask a passer-by to ask for directions and where does the street go to, with me being just silent at the back seat. Because I know those streets, I blurted to him to take a U-turn and just go back to where we were before taking that route. 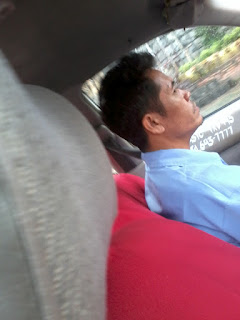 And I thought all along he knew those streets! He asked me for the directions for us to go back to Reliance. Irritable as it seems, I told him the directions, with the comment "Manong, kakaraan lang ho natin dito. Di niyo man lang natandaan yung dinaanan nyo? [Manong, we just passed-by here. Don't tell me you can't even remember these streets?]".

And in that part, I felt and thought surely that this driver just want to have some more fare added to the taxi meter that I currently have during those times.

We drove back to Reliance, and as swift as it goes, with some minor traffic congestion along Pioneer, I got home in about 20 minutes. No traffic at all in Mandaluyong area!

As I near my place, I decided to take some pics of this rude driver. I was also thinking if I should get a pic of the driver's ID but hesitated till the last minute. But good thing I changed my mind.

Before I went down, I asked for his name. He said he is Manuel Chan. I asked back, "Can I take a look on your ID?". He answered back, "I don't have any". Of course, that's impossible, I answered back, "You're driving around yet you don't have a driving license?". Upon hearing those remarks, he then gave this Company ID.

As I take the picture, he then blurted out, "Magsumbong ka lang, kahit sa pulis [You can complain anywhere, even on the police]". Sad to say, I don't need the police. I just have to go straight to this driver's company and make my complains there.

Just as I stepped out of the taxi, he moved forward. What a coward! He almost made me stumble on the ground. I held on the door for some minutes and vented all the anger and shouted at him, "Manong, kung ayaw niyo ng traffic, wag kayong mag-driver. Walang pasaherong may gusto ng traffic. [Manong, if you don't want to get bugged by the traffic, might as well quit being a driver. No passenger has liked the traffic also]" and then I slammed the door at him. He hurriedly left the area, stepping onto the accelerator. I almost got wet with the impact of the wheels on the stagnant water in the walkway.

As I entered the house, I told everything to my older brother, who luckily listened to me earnestly and gave his opinions. Of course, I would have wanted to do those things but I'm also after my safety. Then he just watched me with my every move.

What move am I saying? As I've said awhile ago, I made a complain to their office. I got their office's number in the taxi but it's always busy. I tried looking in the internet and luckily stumbled on their website. I dialed the number and viola, I talked to one of their employees.

I narrated the events, short but surely. They radioed him but cannot be contacted. For sure he knows I'm making my move. The person on the other line told me to call again after 5 minutes but I insisted to stay on the line. They tried to still contact him but to no avail they can't. He might have turned the radio off.

One thing that they assured me of is that he will be reprimanded. Sorry but I don't want to settle with that. I want him suspended. Why? If he was just being reprimanded he can still do it to other passengers, whereas if he will be suspended it will leave a mark for sure.

As much as I would like to stay anonymous, they can't suspend the driver without a proper complain done by the passenger. Leaving me with no choice, I gave them my name and home number. With that, they can update me IF EVER an action will be implemented against him.

I want to share this post, long as it seems, to everyone who's always riding the taxi. it happened to me in broad daylight, right after work. Good thing that I know the route he tried to take. Pity on him for I am a daughter of an Engineer-slash-Former-Taxi-Driver and so thankful that I am streetwise.

Believe me, I really, really, REALLY tried to stay as calm as possible and just enjoy the ride since it was drizzling and there are classic songs on the radio waves, making me feel emotional all of the sudden. But with the turn of events, with the driver getting irritated at first with the traffic when he was the one who suggested to take the route, till the mishaps on the roads to take, who will not get irritated with this. His last remark to me was also the most irritating thing I heard awhile ago. Instead of asking for forgiveness, he dares me to even go to the Police Station. As if I will concede from his challenge.

I just hope that this will serve as a lesson to all taxi drivers out there who want to do something to their passengers, be it taking a different route then making it like they're lost, or having a very fast taxi meters.

We passengers can only not just go to the Police or to your company's offices. We have the Internet, where information is spreading faster than your lousy excuses.

As I've said to some people I've already talked online, I only lose some bucks. But with this post [and if it gets viral], the driver and its company will lose its name, which is bysofar more valuable to any company than money.

But of course, money is still valuable as it seems.
by angelie at 1:02 PM