April 17, 2011. Around 12.10 a.m., a fatal car accident happened in Tarlac. Ten minutes later, he was announced dead. Thousands of fans and people grieved for the lost of a budding actor, a young adult, and a great son that he was. 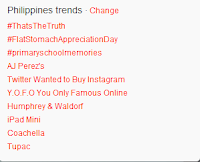 A year later, many commemorate his death anniversary via Twitter. Under Philippines' category, at 9.27 a.m., "AJ Perez'" is trending at Top 4.

I'm sure he is still loved by many. Even thou some may still in disbelief, it was his death anniversary.

Let us all offer a minute of silence in repose of his soul. May he rest in peace. Amen.