Popped-up By The Wheatgrass Drink

A few weeks ago, Easy Pha-Max Wheatgrass had an online promo of guessing the word the Gosiengfiao sisters, Alodia and Ashley, had mentioned in their "How They Show and Feel Love" video. Take a look at it:

Upon watching it for the first time, I had 2 words in mind: Family and Pop-up. But it was clearly indicated in the instruction that the word to-be guessed was on the part of "How do I feel I am loved". They even gave a clue that it's not family nor supports. That's why I stuck with the word "Pop-up".

Thirteen days after, they announced the winner. Guess who won... :D 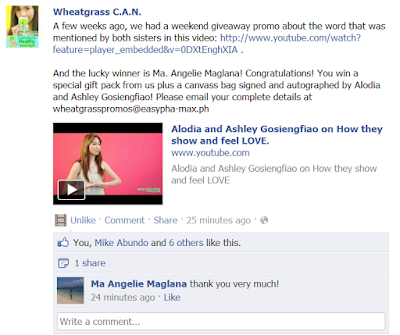 Yes! It was me! Upon noticing the tweet @WheatgrassTweet made, I hurriedly checked my FB timeline and yes, I found the post!

It was really unexpected for me. Thank you so much Easy Pha-Max Wheatgrass!

I also wanna thank the Gosiengfiao sisters, Alodia and Ashley for the inspiration. I've been a silent fan since you became cosplayers and just got out-of-the-shell recently with your frequent TV guestings and appearances. Maybe the fangirl out-of-me got out during the video-watching that's why I was able to keenly hear the words they uttered.

Again, thank you so much Easy Pha-Max Wheatgrass and the Gosiengfiao sisters! ^^
by angelie at 2:45 PM