Xian Lim on The Morning Rush

I was really surprised to learn that one of my celebrity crushes Xian Lim [who starred in the recently concluded Primetime Series My Binondo Girl] will be actually visiting the ever-famous RX booth on Friday.

I really had no definite plans of going to the booth yesterday. But things had changed when my mom messaged me on the phone, saying that I have to go home in our Bulacan house 'coz of some emergency that pertains to my dog.

Luckily, my co-rusher Eugene happened to live near our provincial home. So we met on the bus and then planned on how to go and see Xian the next day. And this made me realize that I want to see him.

Next day, I woke up at 4.00 am, got ahold of my belongings and stuff [I even ironed my dress that was still damp from last night's quick landry]. I left the house around 5.00 am and met Eugene in Jollibee Pulilan around 5.20 am.

We rode a bus bound to Pasay City and took off at Ortigas area, walked towards Strata 2000 and waited for Xian to arrive. We arrived at the booth around 6.50 am.

Around 7.35 am, Xian had arrived! With a maroon jacket, and a glasses on, he's simply looking great with his outfit!


He didn't go inside the booth 'coz he's letting his pants out first. He JUST ran from the Ground Floor up to the 17th Floor in order to be in the RX booth, without even breaking a sweat! Talk about him being a super man. 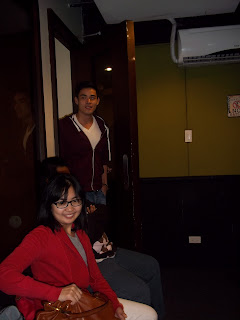 Upon entering, fans, aka the girls present, sworn over him. But unlike some other artists, Xian showed his super kadooper ultramega big smile to us. He even was suprprised to see many people present. He's so nice 'coz you won't see him not smiling. He truly was enjoying the time with us.

Thanks to JRhyan who came in prepared, we had a photo of him with a greeting to our fellow rushers. We even had a video of it. :) 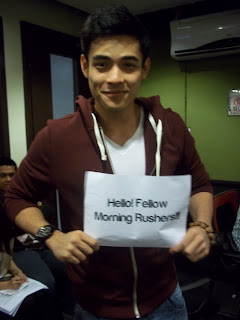 And here's the video, JRhyan's version ['coz mine's till not uploaded. Boo me! :/]

We had so much fun with him on the booth. The TMR trio had also made a special epic rap-off on his visit. Here's the video [credits to JRhyan again].

Of course, we wouldn't missed the opportunity to have our photos taken with him. Here's mine:

Till the next meet-up again, Xian. And I hope you had a great time with us. Thank you for the opportunity of meeting you in the booth. :)
by angelie at 6:49 PM