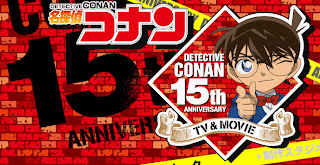 Detective Conan 15: Quarter of Silence is the 15th movie installation to the 15-year anime series of the same title, Detective Conan. It was released last April 16, 2011 in Japan. It was directed by Kobun Shizuno who replaced Yasuichiro Yamamoto with Music arranged by Katsuo Ohno.  Yamamoto was the supervising director.

SUMMARY:
The story started with the opening of the Touto Line (MTR) with the Governor of Tokyo gracing the event. Asakura Yuuichiro, Governor of Tokyo had received a theatening letter the before the day of the opening. Alongside the opening of the train line, Edogawa Conan and the Detective Boys were driven by Professor Agasa Hiroshi at the Beika Tunnel that passes under the new train line. As they pass on a emergency parking bay along the tunnel, Conan had a glimpse of a man standing without any vehicle with him, grinning like a demon. This made Conan remember the details of the letter sent to the governor he heard from Mouri Kogorou. He then notified the police about this and made stop the train and the vehicles passing on the tunnel to avoid more casualties.

A press conference was held, naming Conan as the 'witness'. After watching it, Conan researched about Yamamoto's political history and stumbled upon the Building of Kitanosawa Dam in Niigata Prefecture. Yamamoto, as Conan learnt, convinced the dwellers of Kitanosawa Village to move to a replacement village so that the dam will be built where the village was situated. Many protested against the idea but due to sheer influence of the then minister, the people were convinced left the village. Coincidentally, Conan and the others have a trip to the said village for the Snow Festival.

Conan, the Detective Boys, Mouri Kogorou and his daughter Ran, and Suzuki Sonoko (Ran's Best friend) went to the village. Upon arrival, Conan were curious about the dam, constantly asking information about it and the old, sunk village. The group met some locals namely Yamao Keisuke, Toono Mizuki, Tachihara Fuyumi, Mutou Takehiki, and Hikawa Shougo. He then heard 2 related incidents happened at the village 8 years ago: the death of Toono Natsuki (sister of Mizuki) and the fall-from-the-cliff of then-comatose Tachihara Touma (son of Fuyumi). He then discovered that these locals were childhood friends and elementary classmates but have grudges with each other and problems of their own.

Conan's group enjoyed their stay. It was on the 2nd day of their stay at the lodge that they saw Touma for the first time, having been awaken from his 8-year comatose. His mother and Mizuki were shocked about his awakening, news spread to his former classmates and friends who visited him. Later that day, on the hike near the dam, Conan and the others found Hikawa dead on the snow. They assumed that it's a suicide but various suspicions arose.

The next day, the group, together with Touma, decided to catch some glimpse of the sunrise. They also withnessed the Diamond Dust Phenomenon which had triggered some lost memories of Touma to return. When they returned to the lodge, Conan searched through Hikawa's belonging and found out an old newspaper clip of a robbery at a jewelry store, on the same date when the 2 incidents in the village happened. This made some things clear for Conan.

At the time of the festival, bombs exploded at the cell site bases of the village which made Conan's assumptions correct. He then searched for the other Detective Boys members only to find out that they accompanied Touma to the accident site. Things went bad as the children were being followed by a gunman who wanted to silent Touma. Conan and Ai had reached the children and led them to safety in the dam, explaining that Yamao is the culprit. Conan then went to the control room to notify the guards for the bombs only to find out that they were stun-gunned by Yamao already. He then revealed the truth: Yamao plans to dig out the jewelries he robbed from the jewelry store in Tokyo 8 years ago, that he hit-and-run Natsuki, and that the then-7-year-old Touma saw the diamonds in his car that's why he decided to kill the child. Yamao planned to bomb the dam to recover the treasure. In doing so, he planned to cancel the Governor's trip to the dam to buy some time.

Yamao got ahold of Conan and hurt him. He almost had gunned him down if Mizuki hadn't shot Yamao's right arm and firing at the gun away from him. Yamao and Mizuki wrestled for the bomb detonator but Conan gunned Yamao with this tranquilizer gun, making Yamao fall asleep. Little did they know that the bomb were activated with the fall of the detonator. The Detective Boys, together with Mizuki, Mutou (who recovered from the stun gun), and the dam guards hurriedly ran to safety but Conan was left behind as he helped Ayumi get to her knees. He then checked the area and thought of making an avalanche to avoid the village getting sunk in the dam water. He diverged into the snow mountain and successfully made an avalanche but he had caught on it. Ran saw Conan being divulged by the avalanche so she, together with the others, searched for Conan to beat the quarter-hour time limit of the avalanche. Luckily, Conan was found, thanks to Ran ringing and calling his name (real name: Shinichi) out loud causing him to regain consciousness. I would rate this movie 9 out of 10. This movie is intensely made! Every Detective Conan fan, me being one, really had a great time watching it. The story was nicely done, thou they didn't give more emphasis with the relation of the governor with the village aside from the dam. I was expecting more exposures of the governor but then, I think that the producers wanted to focus on the more important parts.

Similarly, on the beginning portion of the movie, Conan was acknowledged to be the witness of the bombing but wasn't given credits as the 'savior' of the village. He almost lost his life saving the village but the village didn't recognize it as such. I hoped that Conan will be given a proper credits next time, just as He was credited at the beginning.

ShinichixRan scenes are missing too. They had one, maybe, when Ran tried to ask Shinichi about his would-be souvenirs but that just it. No more, no less. Then a little, thou not totally theirs, when Ran called Shinichi, asking help. I really don't think that's quite okay for her mind's occupied with finding Conan (who apparently is Shinichi) then ended up asking Shinichi for help. Maybe it's somehow good too 'coz with that, our little hero had returned. Maybe they should have given a little bit more of their scene, maybe a flashback.

Also, I was expecting Conan to snowboard earlier in the movie. But he started snowboarding when he and Ai looked for the Detective Boys in the dark. I enjoyed his skills during the edge of the dam explosion and at the avalanche. I still crave for more, being him a great boarder.

Over-all, this movie is great. It is action-packed, one adventure-thrilling movie that the Detective Conan movies are known for. This is highly-recommended for all people, DC fan or not, as long as they thirst of some snowy-white adventure.

DL Links are availabe at the DCTP Website. DCTP is the translation group behind all the English-subbed and English-translated Detective Conan (and other works of Gosho Aoyama) manga and anime. Credits for their hard work and dedication.