yes, i'm this happy 'coz it'll happen only once... haha

but before reaching my 27,279th tweet, let me show you one [and other] special object that showed up in my twitter statistics...

check my no. of tweets below... and also my following and followers... 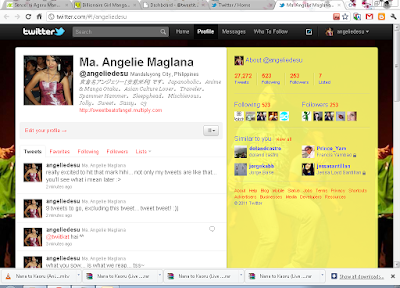 isn't it great? i've lasted only for about almost 3 or 4 yrs in twitter and i've reach a whooping 27,000+ tweets! man, i must be really addicted to twitter hahaha :D 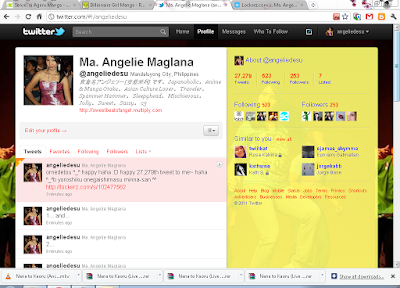 and since it's once-in-a-twitter-timeline, i made a banner [notice the url in the tweet] :D

and since lockerz were barely new [again, with so much revamping and system restructuring], tweeps can't view the photo within the twitter page for now...

so for those who want to see the self-made banner i had... here it is :>

don't be bothered with the color. there's nothing new to it. they're my faves btw :D

so much for this celebration... hoping for more tweets to come hihi ^^

with that, arigatou twitter-san to yoroshiku onegaishimasu ^^