this is one great day! not only that i was able to meet my bff faye again but also got the chance to hang-out with my mapuan friends kat, selle, and ef.

though it's a typical gala for us 4, the one i had with bff was really different. we just hanged around the mall, buy foods and foods endlessly (though we also stopped at one point ^^;;) and go here and there in diff. shops we came acrossed.
i actually started this day early, having being woke up at around 7.30 a.m. but due to my laziness, i stood up from the bed at around 8.00 a.m. but i did my morning habits right away. supposed to be i'll be leaving at around 9.30 a.m. but due to some circumstances, i left the house at around 10.00 a.m., our assumed time of meeting, as agreed by bff . with fate playing some tricks on me, i arrived at sm megamall at around 11.30 a.m. thanks to endless motorcades of manadaluyong city's candidates for local position under the lakas-kampi cmd party. funny enough, i saw one of the running councelor doc alex sta.. maria as i wait for a jeepney to robinson's (formerly sogo home center). he then waved his hands on me 'coz he saw me taking some pictures of his convoys. little did he know that i'm planning to report it to boto mo patrol mo. but i've changed my mind. haha!
here's the picture i'm talking about. you can see doc sta. maria in his yellow-and-green top above his truck... 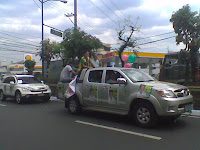 lucky for him that i've changed my mind in reporting his activities now that the election campaigns should have been ended last night. but i don't blame him. last night, as the lakas-kampi cmd had having their meeting de avance in saniboy multi-purpose center (a stone throw place around my crib), the electricity went out. and it went on for 4 hours or more. unlucky for me is that while i was riding the jeep to sogo, traffic had struck the roads i'm on. that's why it took me 1.50 hours to go to sm megamall than having a 30-minute swift journey. -___-
upon arriving at sm megamall, i immediately looked for faye. then we headed right away to bdo megamall branch for her payment for her order. what could that order be? that's something faye should be saying first. ;D
after that we headed for odyssey music store in 1st level to look out for SuJu's Marry Me corner. we find it good but DongHae's standee was not around. that made faye feel disappointed. that's why we went outside of the store after looking around. and oh! i saw SNSD's albums. i saw their 1st, Girls' Generation, the mini album Genie and the 2nd album Oh!. but to my dismay, the 1st mini-album Gee was not there :'(
here's our pictures while in odyssey ;D 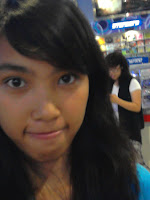 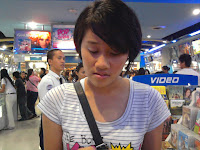 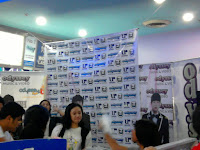 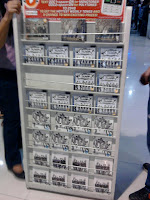 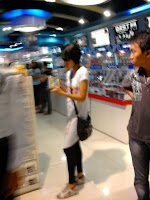 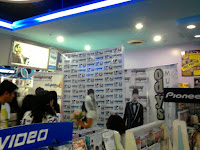 though it would be great if we had the chance to have our photos takes with the standee of SuJu, we left for the crowd's getting bigger and DongHae (faye's fave among the 13 boys) wasn't around. so we kicked off to our lunch aka merienda time in sm food court. :D

faye had squid rolls while i had a squid tofu. both tasted great! we ordered it with the noodles. good thing that the soup is the delicious chicken soup. it made our tummies full already! though we still wanted to have some siomai from the siomai house, our tummies said no hahaha! :)) 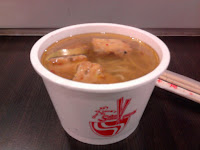 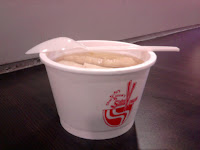 after this food trip, we went to bioresearch and comic alley to look for some "saleable" items. in bioresearch we looked onto some hamsters on display. they're terribly cute! faye was thinking on having an additional ham-ham (our term for hamsters hehe) as her pet. she do have some ham-hams at home. we saw how the caretakers put the ham-hams on their cages and how they sort the ham-hams out. we also observed how they managed to distinguish the genders of the ham-hams.

in comic alley, our usual stop whenever we're at a mall, we just looked for some anime and movie dvds worth watching. we also looked for some asian pop cds on sale. but we didn't buy anything.

here's some of our photos in bioresearch :D 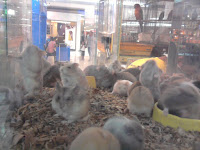 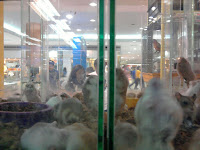 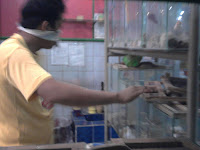 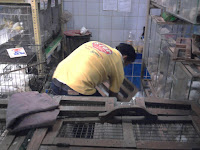 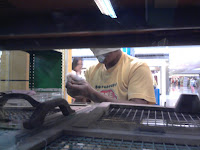 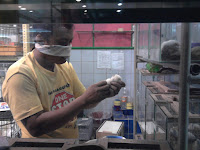 manong caretaker had stolen the limelight from us. hmp! LOL :P

while looking out on what manong caretaker is doing at that time, we both saw some rabbits looking at faye in a hateful way. they seemed to be annoyed over faye looking at the ham-hams. haha!

here are the pics with faye's encounter with the bully rabbits! :P :D 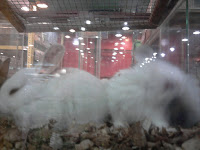 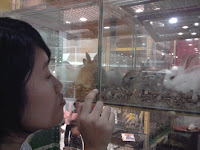 the rabbits kept on ignoring faye until we left the facility. haha XD

after the bioresearch and comic alley hopping, we moved to national bookstore in order for her to buy the stuffs she needs. then after that we both headed for the cinemas where the 3 girls were waiting. actually, selle and kat were the first ones to arrive there. ef just followed. i introduced faye to selle and kat, and so was to ef. then the same to her. after that, faye left while us 4 girls went inside the cinema 4 to watch iron man 2. oh yeah!

after the movie us 4 girls went on playing some dj-mix-type of game in the cinema lobby area of sm megamall. i spent php20 in order for us to play in my round. the game was good but it made our fingers ache! haha!

after that, i did some photo ops with the iron man himself. though it was not the real thing. haha. look at the results :D 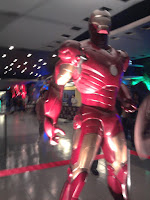 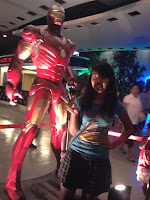 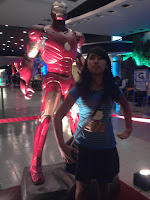 LOL-ng with the last picture. hahahaha. i guess being me really showed off in every picture that i have. hahahaha XDD

after this, we headed for some stores to shop. actually i wasn't the one who bought anything. it was roselle and kat. it was for the mothers' day celebration later. i didn't bought anything. food is enough for mama. hahaha XDD

after buying, we headed to ahve our dinner. but instead of ordering some heavy meals, i chose rocky road ice cream. i just want to have some dessert 'coz i have food in here. that's why roselle and i resorted in taking pictures of ourselves. well, it's more of me taking my pictures and her. haha. 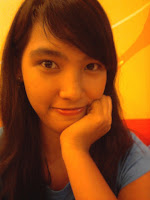 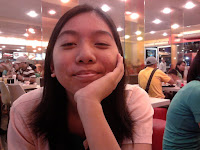 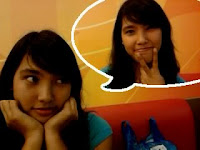 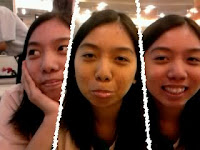 see how we ruined my phone? hahahaha XDD

after eating out in jollibee, we decided to part ways 'coz it's getting late already. i took the fx ride to kalentong while roselle and ef went to the mrt station. kat had her own fx ride to cainta.

though it was tiring, this day is full of fun. i got to enjoy my day with friends from diff. parts of my life. though the introductions were very short i hope they won't forget each other's faces. haha XDD

i hope more gala like this will come through my way. it's great to share the day with the people i loved the most. :)