i am just glad that somehow i am beginning to eradicate the gap between me and God and also to Mama Mary and Jesus.

in the recent years where i was in mapua, no Catholic practices were held. this is one of the things i'm missing in my life. as a girl raised in a Catholic school, with a devotion to always pray, sing songs of God, and participate actively in masses, staying in mapua is a desert for me in terms of this practices.

i always longed for these practices to occur, even just for some time. but i guess the school's not that devoted, as much as they said.

some of my friends were Christians, meaning those who were not Catholics but still believe in Lord Jesus. i am not against them. in fact i was so envious of them for they can still perform their duties as a Christian even in hectic schedules.

there were times that i thought why not be converted into a Christian. in that way, i could still perform the activities that i was longing for. but one thing came across me: how will i give love to Mama Mary if i will be converted?

that's why i am renewing my faith little by little. not under the Christian way, but the usual ways that i have. but now, i have the strong faith in God that i got from my Christian friends. :)

i started again to read the bible which i was supposed to do everyday, either before sleeping or after waking up. i also bought some reading materials. it doesn't matter if the author is a Christian or a Catholic one. as long as it will uplift my spirit in praising Our Lord then it is OK. but i have some preferred authors in the Philippines, like Bo Sanchez.

reading these materials little by little help me to recover the lost practices in the past years. this may sound more of a Christian way but i think it is better to practice both ways. i will still attend the regular masses of the Catholic, sing songs of God, renounce my sins, and read the Bible and live a life less of sin.

in relation to that, i just stumbled upon this message to me by God. :)

this message, i assume, is meant for a loved-one. i say, this is for God, especially that i've been trying to do my best to proclaim His name in my own ways.

i hope that i will keep going on like this, loving God all the way. :)

it's been 2 days since i first wrote the write in blood series.

but i won't continue it now.

i'm mastering and gathering up all my strength to write those things here.

and i also need to wake up early later. hayy

this is not the usual blog that i'll be posting. it's connected with the book i'm reading on.

i just bought awhile ago a book by Bo Sanchez entitled Your Past Does Not Define Your Future. i got curious about it for something in the past were making an internal dispute with me.

i started reading it and guess what, i am almost half through with it.

this blogging is part of the 2nd half of the bok. it is more of self-realizations and honesty to oneself. and i really really need those two.

i'll blog it part by part. i'll answer each of the questions 'coz it won't do the healing if i do the short-cut one.

Start when you were born...

i didn't accept those facts at first. i wanted a normal delivery wherein you're in a hospital with nurses attending you. but it was really the other way around.

the clinic was the physician's. it was in namayan, mandaluyong. near the oil depot of small players in the industry. i don't know how did my mom meet dr. gan.

when i was out in the world, both of my parents, including my lola may, thought that i was a HE. the main reason is that i have this fat private part that they thought it was the male's. then when they found out that i was a SHE, they became so happy.

the normal babies would weight around 6-7 pounds. but i was no normal back then. i was a 8-pound baby! that's why i have this baby fats in me. hehe. :D due to my fatness, all the baby dresses that my mom had used for my older brothers didn't fit me. the only baby dress that did was that of a one-year old. i'm so big for a day-old baby. hahaha!

as i stumble upon old pictures of mine, i found out that i have only few CUTE baby pics. it was more of my kuyas'. that's why i felt jealous of them. it is as if they have more attention when they were babies than i was during that time. i f i have some, i could see them with me. but me on a solo pic? more often than not.

i just knew that i was special to my lola may, though i was not the first girl grandchild. i just don't know. i have this special connection with her. every time that my mom's out, i would look for her. even when i was already studying. i was always looking for her. maybe i grew up with her on my side always. but i somehow managed to learn living without her when she went back to bicol.

i was not that satisfied with my birth date. it was already in the month of love yet i wasn't born on the heart's day itself. it was barely 7 days to go when i went out. then whenever i searched about the events happened on my day, only few were found. that's why i really hoped that my day was somehow special.

so there you are. the first part of the writing in blood series. i just hope i could do this every night before i sleep. it'll be a habit for me from now on. as Bo Sanchez had said, answering these questions could take days,w eeks, or even months. but it's ok for as long as you answered them truthfully, then you will be from your bondage.

i;m counting days kasi malapit ko nang i-shut down 'tong multiply account na ito.
for over 4 years kami nagkasama. and it's somehow hard for me to say goodbye to a friend who's been there with me through ups and downs. :(
pero it doesn't mean that i'll delete this one. this will still be going on but the posts and everything will be put to my new account, sweetbeatofangel.
i'm just waiting for a right time to use that account, which is, the new year. next year din kasi will mark my 20th year in this world.
so magandang chance yun to show what i really really want and who i really am. :)
kaya as frequent as i can, i'll be blogging in here for nth times. para naman ma-cherish ko yung moments with this accounts.
i'm just killing time in here. haha. so till then.
jaa ne! ^^
by angelie at 8:41 AM

ang tanung kasi sakin, "what will chris say if he will hug you?". ang sagot ko, "a big why i guess. but i think he'll appreciate it".

then biglang nag-comment. "yeah, a nice hug would do". osmoething like that. 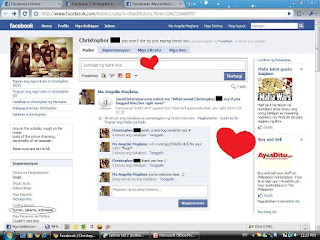 define ang "you have found the right one in the inexpressible comfort of feeling safe with the person"?

it's true that i feel comfortable with him. safe with him when we were in dumaguete. but i think that was it. di ko naman inaasahan that i would fall for him, let him be my first love (so i think), and just have my heart broken dahil sa long-distance relationship na di niya kayang gawin. darn. napakaganda pa nga ng sinabi niya eh. super tanda ko... "IF NI WAS JUST RIGHT THERE IN THE PHILS. I WOULD HAVE LIKED YOU. BUT I CAN NOT WITH THIS DISTANCE". :(

honestly i cried and cried after that. but i accepted it with open arms.

di naman unang pagkakataon na nangyari ito eh. the other night merun yung "where would you kiss him" and i answer, "next question please". then he just laughed it off. :))

merun pa yung sa quiz na "what's the name of the one you will be marrying". biglang lumabas CHRIS. gulat din ako. reaction ko na lang is "no comment" then bigla siyang nag-comment na "who knows what future will bring" something like that. naku kaloka! :))